The Secrets of the Odyssey (7): Circe and the Underworld

As his journey progresses, Odysseus gradually loses all his ships and companions, all of his spoils of war, until he becomes solitary at the very end of the epic. Right after the disaster with contrary winds, he loses eleven out of his twelve ships in the encounter with Laestrygonians, man-eating giants. Broken and in mourning, while the moon is still in her dark period, he arrives at Aiaia, Circe’s island. The Sun has now entered Leo and the Midsummer is approaching. Odysseus is about to meet the solar goddess queen Circe, daughter of the sun god Helios. But before that he decides to feed his crew by killing a giant stag and carrying it back to the ship:

“In describing the killing of the stag Homer establishes important times not only in the day but also in the solar year and the 19-year cycle. The stag’s death-blow comes from a bronze-tipped spear, a metaphor for the sun and one that is repeated at the climax of the Odyssey. The spear strikes halfway down the line of the beast’s spine, which metaphorically places the sun on the ecliptic below the ‘back’ of Leo. It is now just halfway through the solar year. It is also the mid-point of the 19-year cycle and there are a further nine and a half years to go before Odysseus will be reunited with Penelope. Odysseus carries a giant stag back to his ship at the halfway point of the 19-year cycle with the sun in the stars of Leo. The stag’s golden horns represent the rays of the sun.”

The name Circe means “circling hawk” or “Encircler” and her island lies in the centre of the starry seas of the universe. The encircling horizon of the island is the Sun’s ecliptic. Odysseus notices the smoke from Circe’s chimney, which is the focal point of the island around which heavens seem to rotate. The constellation of Leo represents Circe’s enchanted palace. While the Moon is still dark, Odysseus sends a scouting mission to the palace, himself prudently staying behind:

“In the wild wood they found an open glade,

around a smooth stone house—the hall of Kirkê—

and wolves and mountain lions lay there, mild

in her soft spell, fed on her drug of evil.

None would attack—oh, it was strange, I tell you—

but switching their long tails they faced our men

like hounds, who look up when their master comes

with tidbits for them—as he will—from table.

Humbly those wolves and lions with mighty paws

fawned on our men—who met their yellow eyes

in her beguiling voice, while on her loom

by that craft known to the goddesses of heaven.” 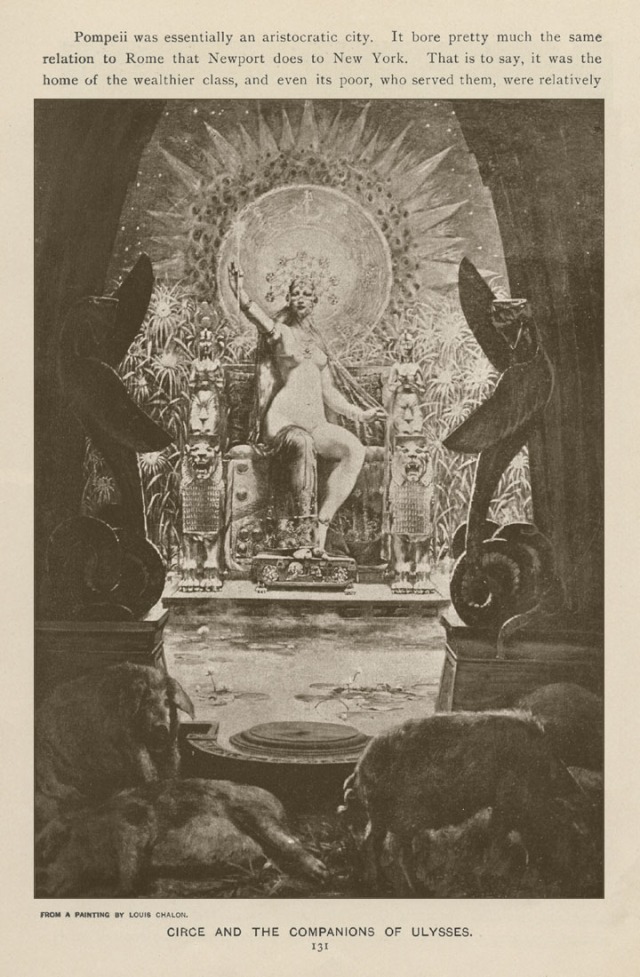 What ensues is probably the most famous episode of the Odyssey: Circe turns Odysseus’ companions into pigs while their minds remain human. When Odysseus finds out what has happened, he sets about rescuing his companions, encountering Hermes on the way, who instructs him how to resist the spell of the goddess by means of the moly flower and a sword. A very deep symbolic message is encoded in that part of the Odyssey. Roger Sworder, in his book Science and Religion in Ancient Greece, restores Circe’s true power lost throughout the ages of patriarchal discourse. Before I summarize his musings, I would like to stop for a moment and ponder on the above passage from the Odyssey. She appears as a powerful Lady of the Beasts in it, a tamer of wild animals (wild instincts), a bringer of order to the universe. She is portrayed as the ultimate goddess from whose body the universe was formed, yet she is also the chaos that universe will eventually return to. She acts as a powerful and crucial initiator for Odysseus. In The Women’s Encyclopedia of Myths and Secrets, Barbara G. Walker writes that the word “kirkos” (falcon) comes from the same root as the Latin circus, which was originally an enclosure for funerary games. The falcon is a fitting totem for her because in symbolism it is both a solar bird and a death-bird. Walker also calls Circe a fate-spinner, “weaver of the destinies of men,” who manipulates forces of creation and destruction. What is more, Pliny wrote that Circe “commanded all the lights of heaven.”

Roger Sworder gives an amazing analysis of the role of Circe in the Odyssey. She is the only one who calls Odysseus a “hero” in the whole epic and he is the only one who was able to resist her attempts to bewitch him. She was able to recognize his exceptionality instantly. Also Plato was of the opinion that Odysseus was very wise. Sworder summarizes Plato’s “Myth of Er,” (a legend which concludes his Republic), which contains references to the Circe episode. He remarks:

“Towards the end of the myth, the souls who are about to be born again choose the next lives which they will lead, and there is a general metamorphosis as the souls who were once people become other animals and those who were animals become people. This passage is certainly comparable to Homer’s account of Circe….”

Sworder calls the transformation into pigs “a descent into a lower form of life” and “an incarnation in a lower body.” He adds that “in Circe’s sties we are given an uncanny sense of the interchangeability of human and animal bodies….” Like Plato’s goddess Necessity, Circe seems to know Odysseus’ destiny and she helps him do what the gods and the task of soul making require him to do. She gives him detailed instructions how to get to the Underworld, where he needs to consult the blind soothsayer Teiresias. Sworder says she wields three crucial powers: “the power of metamorphosis over other beings; access to the realm of the dead; knowledge of the passage over the heavenly circuits represented by the Sirens, Scylla, Charybdis and Thrinacie.” He adds that “Circe’s palace is our whole world of physical nature. She is not primarily the goddess of metamorphosis; she precipitates people into their earthly embodiment.” Before Odysseus leaves her island, she gives him detailed instructions about the journey ahead of him. He is under the aegis of Circe from now on; also he is one of the precious few humans who have mated with goddesses. Circe gives Odysseus a son, Telegonus, who in the distant future back on Ithaca will accidentally kill his father, not having recognized who he really is.

But how was Odysseus able to resist Circe’s spell? He used two props to achieve that end: the moly flower given to him by Hermes and a sword. Sworder writes of the moly herb:

“…the plant comes with its root. It has been plucked from the ground entire, not picked, and its flower is the very opposite color from its root, milk-white against black.

And just as the eastern lotus represents the evolved soul which has reached bliss from its root in the world of illusion, so the Moly may symbolize the double nature of the human being whose base black root yields the lovely flower of compassion.

This is the symbol of the human being who is liberated or enlightened while still living. The entire physical organism remains but it is no longer attached to the realm in which it developed and from which it grew.

She cannot debase him because he is uprooted and detached.”

Odysseus had already been uprooted and detached in the Cyclop episode, where he called himself No one. While his companions still wallowed in the mud, Circe bathed Odysseus in a hall of glowing gold, silver and bronze. But as the lotus flower grows over and beyond the mud of the world, so do Odysseus’ companions get turned back again into human form. It turns out the experience has transformed them: they look younger, taller and more radiant.

As the Sun leaves Leo and enters Virgo, Odysseus and the rest of his crew set off towards Hades. Visiting Hades is a pivotal point in the Odyssey and Odysseus’ most important adventure. Circe tells him that lifeless shadows of the dead crave blood because they desire embodiment. Odysseus needs to pour blood of a sacrificial black ram in order to give the shades their voice and be able to speak to them. Like many mythological figures before him, Odysseus descends to the underworld to bring up his soul. Talking to the blind Teiresias is part of his mission which does not seem to be the most crucial one. The real crux of the matter is giving a say and listening to countless voices of all the famous dead men and women, the superheroes, superheroins and myth makers that lived before him. He speaks, among others, to: Ajax, Agamemnon, Minos, Orion, Tartarus, Sisyphus, Heracles, and twenty-nine famous mythical women such as Phaedra, Ariadne and Leda. It is a poignant episode, especially when he meets his mother who had died before his return, out of grief for not seeing him. She cannot clasp him while he tries to embrace her corporeal nothing in vain.

What he returns to the surface with is immaterial but incredibly substantial: it is the stuff that dreams are made of, namely all the myths of Greece. In Homeric Moments, Eva Brann calls Hades “the safe-depository of tales, the treasure house of myth.” The ghosts are like “gibbering phantasms” but the story teller such as Homer or Odysseus infuses them with life and blood through his gift of poetry. Odysseus drinks from the source of Mnemosyne: the collective Greek memory. He is the last mythical hero, for after him begins a historical era, as Roberto Calasso wrote in his Marriage of Cadmus and Harmony:

“Partly because he is so near the boundary, so near the point where the circle closes, Odysseus is the hero who most often tells stories. …last among the heroes to return from Troy, Odysseus is also the one who right up to the end maintains his contact – and what an intimate contact it was – with the primordial powers who appeared in the first phases of the cycle. His wanderings were partly a compendium, a roll call, of all those beings and places that were already growing confused in many a memory, already being removed to the realm of the fabulous. … After his return to Ithaca, man’s approach to primordial beings and places could only take place through literature.”

This entry was posted in The Odyssey and tagged astrology, Circe, goddess, Greek mythology, Hades, Homer, Ishtar, lady of the beasts, Leo, Odysseus, Odyssey, Soul, the underworld. Bookmark the permalink.

16 Responses to The Secrets of the Odyssey (7): Circe and the Underworld

Leave a Reply to the muscleheaded blog Cancel reply